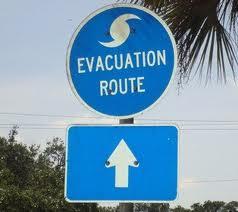 Last Stand has consistently urged adoption of realistic assumptions for evacuation modeling that will provide for the safety of all Monroe County residents and visitors in the event of an approaching hurricane.

Monroe County is to be evacuated of all residents and visitors in the event of a cat 3, 4, or 5 strength hurricane.  The State of Florida has legislated that this be done in a 24 hour period.  This 24 hour evacuation time will not be met if too many people are in Monroe County when a strong hurricane is about to strike.

As a result, modeling hurricane evacuation times based on population estimates has become an underpinning factor constraining development in the Keys.

Unrealistic estimates or hurricane model assumptions may lead to overdevelopment of Monroe Country with dire consequences in the event a complete evacuation of the Keys becomes necessary.

Monroe County and its municipalities are concerned about the costs associated with ‘takings’ lawsuits by land owners who are unable to develop their properties due to growth management restrictions.  This results in some pressure on those developing hurricane evacuation models to be somewhat more liberal in their assumptions and estimates in order to justify further development.

A 2012 evacuation model determined Monroe County could be evacuated in a 24 hour period.

A total of 354 building allocations per year have been awarded to the county and municipalities so that new dwellings may be constructed.  The City of Key West will receive 90 each year, but if they are not used the excess will be reallocated within the county  Key West has sufficient allocations to develop 94 vacant lots and plans to use the new allocations for affordable housing.

Every 10 years Monroe County is required to update their hurricane evacuation model to demonstrate that it is possible to evacuate within the 24 hours required by Florida statute.

The Florida Department of Emergency Management has developed an evacuation model that can integrate regional as well as state-wide evacuation predictions.  A number of assumptions are made that predict both the physical capacity of the road network and the behavioral patterns of those who choose to evacuate for Monroe County.

In 2011, Monroe County, the municipalities, the Department of Economic Opportunity and FDEM conducted a series of public meetings to gather information and public input as to the assumptions that would control the model and demonstrate the ability to evacuate in a 24 hour period.  Each government body passed a resolution agreeing to the assumptions.  The resulting model was included in the annual report to the Florida Cabinet acting as the Administrative Commission.

Since that report showed a result of 24 hours based on existing population and additional homes constructed at the same rate as were issued over the past 10 years, the Administrative Commission approved issuing building allocations for the next 10 years.

Storm Strength Category 5 – Last Stand supported the assumption of a category 5 storm as the basis for driving the number of evacuees.

Road Carrying Capacity – Last Stand supported the use of a Florida Department of Transportation study that defined the maximum number of sustained vehicle capacity of the routes out of Monroe County.

Tourist Evacuation – The planning model ignores tourist population because Monroe County emergency operations procedures call for the mandatory evacuation of tourists 48 hours in advance of the arrival of tropical force winds.  Last Stand criticized this assumption as overly aggressive considering the limitations of National Weather Service ability to predict the intensity of an approaching hurricane (i.e., we may not have 48 hours notice that a hurricane is of sufficient strength to warrant evacuation.)

Military Evacuation – The NAS Key West Commander has provided a letter affirming that the Navy will evacuate 48 hours in advance of the arrival of tropical storm force winds if a category 5 storm is predicted.  This allowed the exclusion of over 2,000 military vehicles from the planning model.  Last Stand criticized this assumption for the same reasons as the Tourist Evacuation.

Mobile Home and Live-aboard Resident Evacuation – The comprehensive plans for the County and municipalities have a requirement that residents in mobile homes or who live on boats must evacuate 48 hours in advance of tropical storm force winds.  Last Stand has strongly criticized this assumption used in the evacuation model.  Typically residents who live aboard boats and in mobile homes do so because it is affordable housing.  These residents often are busy helping employers and clients make preparation for evacuation as well as what is necessary to protect their own home.  They can least afford the expense of evacuating and missing work days, so they are often among the last residents to flee an approaching storm.

Occupancy of New Units – The evacuation model assumes that new units will be vacant at the same rate as determined by the 2010 census.  Last Stand has labeled this assumption as aggressive and urges monitoring of new unit occupancy as an early warning signal for evacuation difficulties.

What You Can Do