Peary Court Will Have Affordable Housing 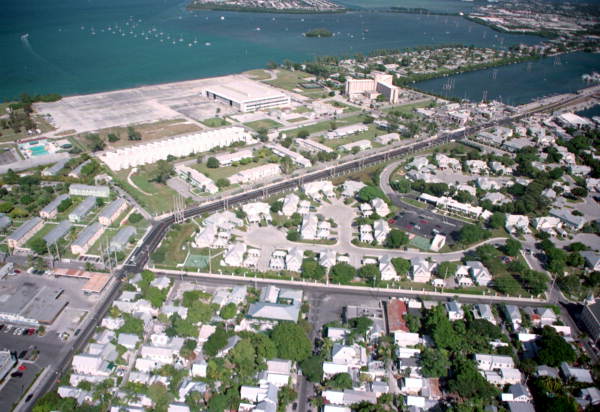 Peary Court's private developer and the Key West City Commission have agreed that any development will include at least 48 units of affordable workforce housing.  The agreement was reached after several meetings and rounds of negotiations between the developer, City Commission, Last Stand, and other interested groups.

Peary Court, located at the corner of Eaton and White, has been a military housing site since the 1800’s.  In the mid 1970s the Navy allowed the City to use the 29-acre parcel as a community park, full of green grass, ball parks, and champion trees (extremely rare in compact Key West.)  When the Navy proposed taking it back in 1989 to construct a massive concrete military housing complex, many Key West residents were dismayed.  There was ample controversy about the project. The City Commission passed numerous resolutions, along with other public and private entities, begging the Navy to find somewhere else to put what they were calling "desperately needed military housing."

The goal was to "Keep Peary Court Green".   There was a petition containing over 5500 signatures, and events became contentious.  At one point during the controversy, Capt. Michael P. Currie, the then base commander, said, "If we don't build on Peary Court, they will essentially say Key West does not want the Navy."  The majority of the City Commission then quickly lost its resolve to dissuade Navy development efforts.

Last Stand stepped in, contending that the Navy had alternate housing sites on Key West and nearby islands and that the Navy had violated Federal regulations in the rush to build.  Last Stand filed suit in federal court and won an order requiring the Navy to conduct a proper Environmental Impact Assessment prior to moving forward with the project.  The development was stalled for several years, but eventually the current housing at Peary Court was under construction.

During this time the military underwent a drawdown, and military housing in Key West began to be either demolished or sold.  Upon the ‘request’ of former City Commissioner Harry Powel (who threatened to blow himself up in a trailer located on the Peary Court construction site if a study justifying the housing was not conducted) a Government Accounting Office report stated that "the [Navy’s] housing needs [had] not been adequately justified".   This report came too late in the construction process, and Peary Court as it stands today was completed.

The Question of Affordable Housing

In 2012 it was revealed that the Navy had conveyed all of the housing at Peary Court to a private corporation five years earlier and that a significant percentage of the housing there was rented to civilians.  The land itself had remained the property of the United States, but the land and buildings were about to be sold to the highest bidder and the City was required to enact zoning laws that would govern the property once it transitioned completely away from military involvement.

The problem was that the seller, Southeast Housing LLC, a subsidiary of a British mega-corporation Balfour Beatty, had no taste for the 30% affordable housing requirement found in the Key West code.   Balfour/Southeast threatened to sue the City if the workforce housing requirement was enforced.

Key West suffers from a critical deficit in workforce housing stock; conversion of the 160 units at Peary Court to luxury housing would greatly exacerbate the situation.

Last Stand stepped up, along with many Key West citizens, to urge the Commission to hold strong to the code and require that the affordable housing laws apply to Peary Court.

Last Stand board members attended every public meeting on the subject of Peary Court zoning and advocated strongly for strict adherence to the 30% affordable housing rule.   The sellers refused to back-off on threats of litigation unless there was a provision that would allow an increase in the number of units on the property.   Last Stand opposed any increases in density in overcrowded Old Town, and also pointed out the hurricane evacuation concerns that affect the entire County.   The City Commission and a potential private developer ultimately agreed that the zoning would allow 48 additional units to be built as affordable workforce housing.  According to City code the housing may be built on site or at a another site that could under certain conditions be linked to this development.  The affording housing component must be built simultaneously or prior to the market rate homes.

While researching the issue of affordable housing at Peary Court, Last Stand board members George Halloran and Naja Girard discovered (and shared with the Monroe County Property Appraiser) that, though the Navy had conveyed title to 890 units of housing to a private corporation back in 2007, the corporation had never paid any property or tangible taxes on those units.    The Property Appraiser subsequently filed a lien for $11.5 Million dollars against the private corporation (Balfour Beatty Communities/Southeast Housing LLC) for back taxes, penalties and interest.   Update March 23, 2014: The case has gone to trial and a final decision is due to come out any day.