No Name Key and Commercial Electrification 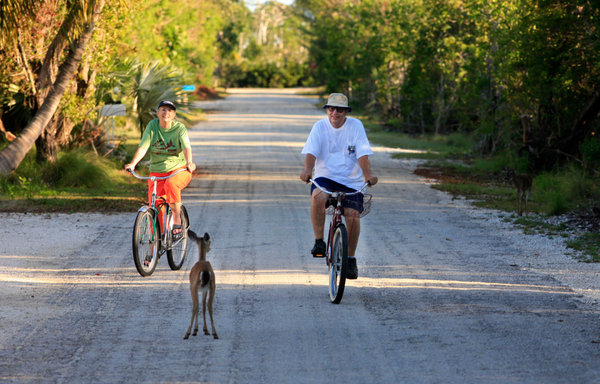 Key events in May 2013 spelled an end to years of discussion and litigation over bringing commercial electricity to historically off-grid No Name Key:  the island’s residents now have a choice between remaining off-grid and connecting to the electrical power grid.

On May 14, 2013, the commercial electrification issue went before the Florida Public Service Commission (PSC) in Tallahassee.  Attorneys for Monroe County, the Solar Community of No Name Key and the pro-utility No Name Key Homeowners Association addressed the commission, as did members of the public.  The PSC concluded it has jurisdiction over electric service to No Name Key, and commercial electrical service should be provided to homeowners requesting it.

The following day the Monroe County Board of County Commissioners (BOCC) voted to initiate amendments to both the county’s Comprehensive Land Use Plan (Comp Plan) and the Land Development Regulations (Code), to lift the prohibition on providing new infrastructure into Coastal Barrier Resources System areas (CBRS units), including No Name Key.  This action was taken in consideration of the PSC’s position and based on recommendations of the county’s land use consultants Keith & Schnars.

The BOCC also voted to withdraw from any further legal involvement regarding utilities on No Name Key.  Both votes were 3-2.

The BOCC’s action to change the Comp Plan and Code rendered all legal proceedings by the Solar Community of No Name Key moot.  If elements of this commercial power case were to be brought before the Florida Supreme Court, even a victory there would not change the fact that homes on No Name Key could now connect to commercial power legally.

Homes to be Connected to Grid

On May 29, 2013, the first of 22 homes slated for electric service from Keys Energy Services was connected to the grid.  That same day on local radio, the executive director of the Florida Keys Aqueduct Authority (FKAA) spoke about the extension of commercial water to No Name Key.  As many anticipated, it appears that efforts to secure FKAA-supplied water will be the next step to change the once-unique character of No Name Key.

In all this, the good news is that Last Stand’s efforts successfully ensured future environmental protection of CBRS units.  The Comp Plan and Code amendments proposed by the county’s land use consultants will, in fact, increase the existing level of protection of CBRS units by making it more difficult to obtain permits to build in these low-lying areas.

However, the opportunity for No Name Key to be an outstanding example of a self-sufficient, low-impact, solar community has been lost.

The commercial electrification issue goes beyond No Name Key because it involves enforcing County laws and regulations concerned with Coastal Barrier Resources System (CBRS) protections within unincorporated Monroe County.  There are 24 CBRS units scattered throughout the Florida Keys.  The units are in the most sensitive habitat areas in Monroe County.

These CBRS constraints have become problematic in Monroe County’s recent efforts to extend central wastewater (sewer) infrastructure in both the Lower and Upper Keys.  This complicates the No Name Key issue and puts the protection of the CBRS habitat at risk.

No Name Key is unique for several reasons:  almost all of the island is within a federally-designated CBRS unit, all of the island lies within the boundaries of the National Key Deer Refuge, and the U. S. Fish & Wildlife Service (USFWS) owns over 70% of the island, which provides habitat for six Federally listed species.

Given predicted sea-level rise in the Keys, a common-sense approach to coastal development is for low-lying CBRS areas to remain undeveloped.  A widely-accepted rule in land planning is:  provision of infrastructure always encourages development.  With the nearly 200 privately-owned undeveloped acres on NNK, the potential for them to be developed would adversely affect hurricane evacuation for Monroe County citizens and, at the very least, increase the value of undeveloped land on NNK.  The latter would increase land purchase costs for Monroe County taxpayers when eventual “build-out” is reached.