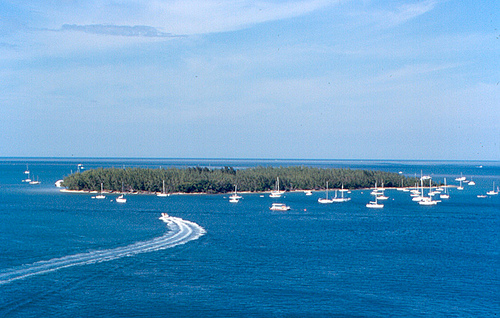 Last Stand supports fair and equal application of land-use laws that encourage development in areas with existing infrastructure and away from areas that are prone to hurricane damage and areas containing important natural wildlife habitat, including offshore islands like Wisteria.

Environmental surveys commissioned by Last Stand documented Wisteria Island, also known as Christmas Tree Island, as an important nesting, foraging and roosting area for dozens of water birds including threatened coastal osprey and white-crowned pigeons.  Wisteria contains one of the largest colonies of bay cedar in the Florida Keys and is populated with over 70 distinct indigenous plant species.  In July of 2012 Wisteria was officially documented as a sea turtle-nesting area.   Additionally, Wisteria Island has, for decades, provided locals and visitors alike with an easily accessible natural offshore recreational area.

In 2010, developers applied to Monroe County for a unique zoning category applicable only to Wisteria island that would have lifted the ban on development of offshore islands that are documented nesting areas and would have increased building rights hundredfold by allowing construction of a mix of over 200 luxury homes and hotel rooms for Wisteria Island.  Under existing laws governing offshore islands Wisteria is assigned a density of two homes.

Allowing such exceptions not only impacts the ecology of the Keys but can have grave consequences for the ability of all residents to safely evacuate in the event of a hurricane.  With only a single narrow highway connecting the islands to the mainland, development restrictions have to be carefully followed.

Aside from consulting with attorneys, biologists, and professional planners, and participating in public meetings at every level, Last Stand board members researched historical documents pertaining to ownership of the island and discovered a forgotten claim of title by the US government.

Last Stand uncovered that in 1924 President Calvin Coolidge had reserved the island for use by the US Navy and that the Department of the Interior (DOI) had, in 1982, transferred management duties to the US Fish and Wildlife Service (FWS.)  Last Stand board members traveled to the National Archives in Washington DC and compiled historical documents further evidencing the Navy’s claim of title.

As a result, the Department of the Interior, Bureau of Land Management (BLM), publicly affirmed the US claim of ownership of the island (November 2011), effectively putting a halt to all development proceedings at the County level.

On August 21, 2012, after 9 months of intensive review, the BLM finalized its findings and formally apprised FEB Corporation of the claim of federal ownership of Wisteria Island.  FEB is now suing the United States in federal court under the Quiet Title Act in an attempt to force the government to relinquish its claim to the island.

A Motion to Dismiss based on a jurisdictional 12-year statute of limitations was heard on April 5, 2013 in Miami.

As of March 21, 2014, the would-be owners are still presenting arguments before Judge Martinez, who is hearing the case.

Last Stand continues to monitor this issue and will continue to support fair and equal land-use laws based on good planning principals as well as preservation of this important undeveloped natural area.

“Final Decision” on Who Owns Wisteria Island Comes Down From Washington:  The US Government Owns it (Key West The Newspaper, August 31, 2012)

Feds unsure whether they own island at center of long-running Fla. dispute (Greenwire, August 17, 2012)

Department of the Navy to Florida Trustees on Wisteria Island Sale:  It is Federal Land (September 27, 1951)