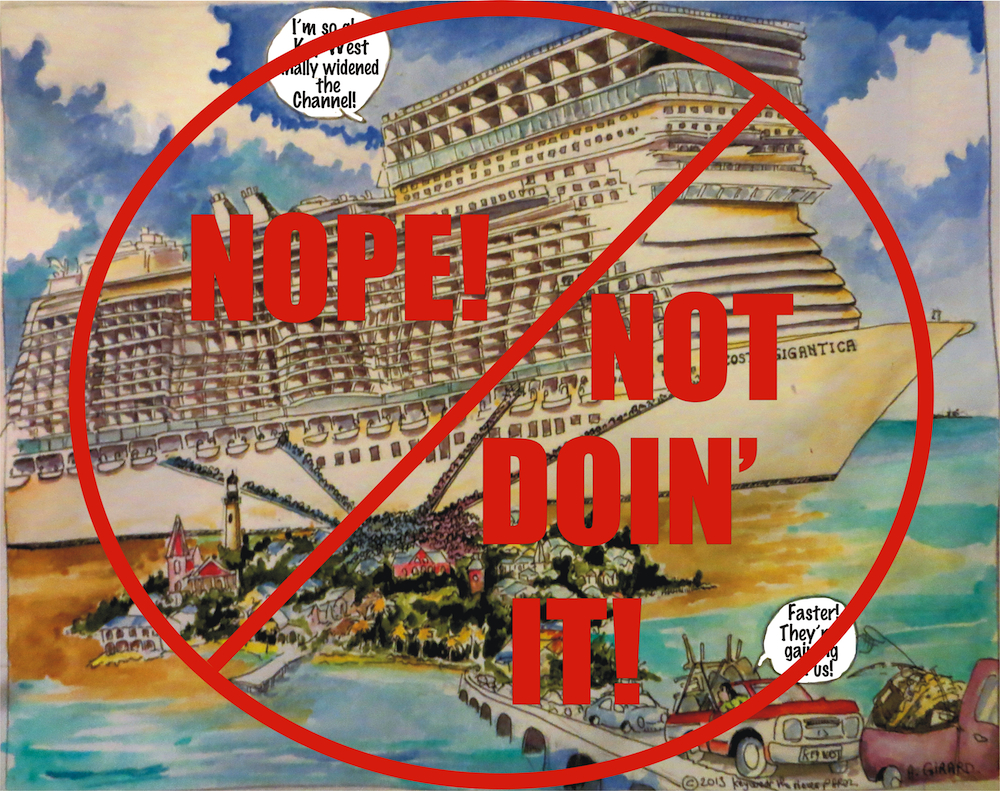 The voters of Key West spoke decisively on October 1st, voting no on the referendum to conduct a channel widening feasibility study.  By voting no, Key West will continue to protect the delicate ecological balance of the Florida Keys National Marine Sanctuary and promote responsible tourism in the Southernmost City.

The results of yesterday’s referendum were decisive.  The citizens of Key West clearly do not want to request the Army Corps of Engineers perform a feasibility study to widen the channel for larger cruise ships.  This commission should take immediate action in response to the vote.

We are asking you to pass a resolution to inform the Army Corps of Engineers that the City of Key West will not request a feasibility study to widen the channel, and that the City will not be requesting NOAA or other resource agencies for a variance to regulations that prohibit dredging in the Florida Keys National Marine Sanctuary.

We support Commissioner Weekley’s call for amending the comprehensive plan and strategic plan priorities to emphasize the importance of the environment to the community. Both plans should have a definite bias towards protecting the near shore environment and improving water quality.  The city should also be active in promoting state wide efforts to restore low nutrient water flowing through the Everglades and into Florida Bay.

Quality of life concerns are real and another factor in the vote.  The city commission can help to address traffic congestion by adopting a reasonable maximum number of cruise ship tourists and crew that are welcome on any particular day.  But it’s obviously not just cruise ship passengers congesting Old Town.  Limits are also required on vehicle rentals and tour vehicles traveling at a small fraction of capacity.  A functional mass transit solution that considers the size of our streets and needs for both tourists and residents to move around the city would go a long way towards easing congestion.

Higher taxes are not the only way to deal with declining numbers of cruise ship passengers.  Disembarkation fees must cover the costs.  It’s the City Commission responsibility when setting the budget to make sure fees are fairly assessed.  If passenger counts decline but the same personnel and infrastructure costs to serve cruise ship tourists are required, then fees must increase.  You need to understand all costs involved to make this decision.

The divisive nature of the issues and the campaign tactics of both proponents and opponents to the referendum had to be anticipated by this commission when you decided to place a referendum on the ballot.  You have avoided the personal responsibility for this decision, but at what cost to the community?  You have a responsibility now to soothe the hard feelings brought on by the issue.  Taking action to support sustainable, responsible tourism would be an important step.  Please consider how the commission can support eco-friendly tourism to help replace the loss of revenue by the community’s choice not to widen the channel for larger cruise ships.

Thanks for considering our comments.

Last Stand played a significant role in informing voters of the issues and consequences of the channel widening referendum, including:

The work continues, however.  Pro-dredging supporters are already threatening future attempts to dredge the Sanctuary, implying that this referendum is only binding on the current city commission.

Last Stand will need your continued support to counter these efforts and ensure the integrity of our ecosystem and economy.