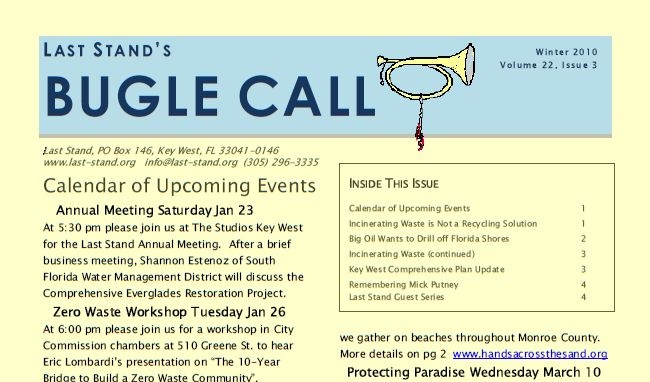 The name “Last Stand” and the bugle logo symbolize and reinforce the organization’s original concept as a small group of citizen activists mobilizing to do battle to protect the Keys, often against seemingly overwhelming forces.

In the mid 1980s, Key West experienced uncontrolled development that threatened the environment, the antiquated infrastructure, and the residents’ peaceful quality of life.   Venerable organizations like the Key West Garden Club, Keys Audubon, and the Nature Conservancy promoted conservation, but in a non-confrontational, apolitical way.  Small neighborhood groups arose around specific issues but after the issue was resolved they quickly disappeared.

The founders of Last Stand saw the need for a new kind of permanent organization to fight the hard fight against the “destruction of paradise” on all fronts, present and future.  This was a last ditch effort of passionate citizens “taking to the barricades” to save what was left through political and legal action, demanding growth management and open government, protecting and acquiring natural lands, and serving as the people’s feisty watch dog.